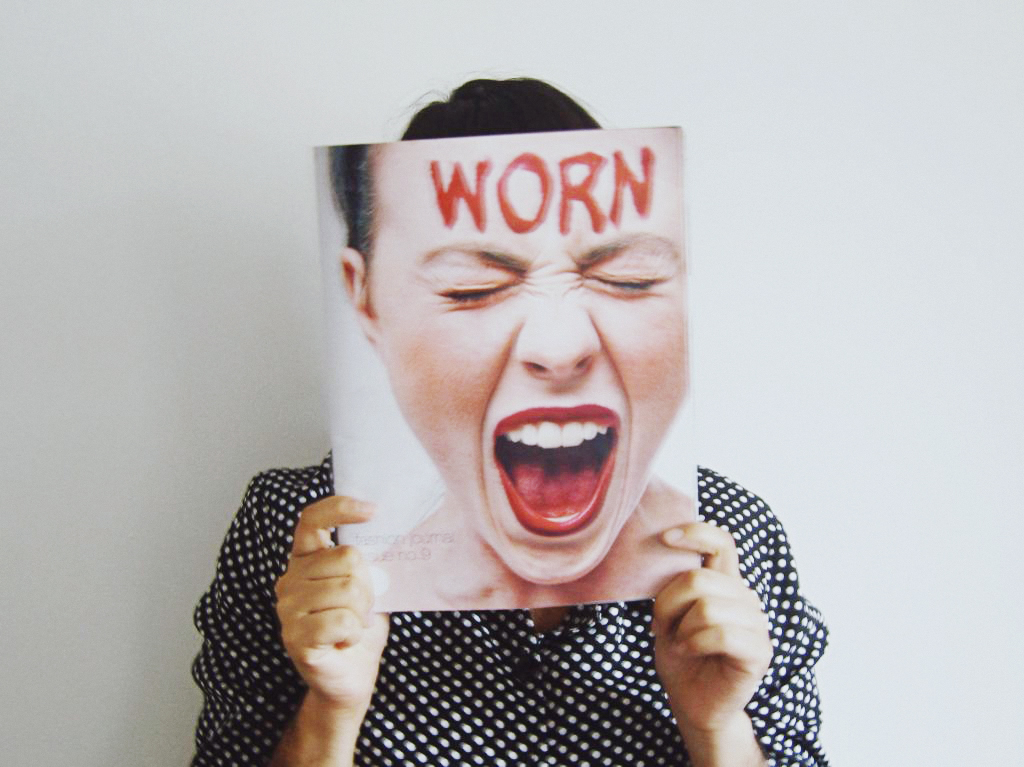 Citations is an ongoing series where I attempt to unravel the multitude of influences that pave the way to now. In these posts, I trace the people, things and experiences that shape my thinking and form the base of a creative outlook. You can view more of the series here. Worn, worn, worn… how many words can I entangle today to express how much adoration I hold for you? Or perhaps that should be held since the final issue landed with a thud through my post box in January. What struck me was that this was an good moment to reflect on the publication. Delve into those bits of the Worn ethos that I’ve subconsciously nicked from every issue I’ve read, and resonate still today.

Worn Journal has a cult following and doubtless, some reading here may count yourselves amongst them. I came to Worn in 2009, when, through the joys of Twitter, I was sent a review copy for the tiny blog I kept at the time. The only remnant of that review is the photograph at the top, but suffice to say reading that issue was enough to hook me into Worn’s World. Back issues and subscriptions were bought, and copies remain amongst the treasured possessions on my bookshelf. Maybe you’ll have similar stories. Worn was a breath of fresh air in the stale climate of late noughties magazines tied to trend-led or celebrity-focused fashion coverage. It tapped into the wealth of knowledge surrounding fashion, with articles delving into history, construction, and niche corners that occupy our dressed lives. Worn wrote what many mainstream magazines seem to ignore. And ignored the rulebook others like to follow. There were no lists – unless you count pieces on the history of shirt collars or types of lace – and articles danced the line of accessibility and academics.

In short, inked into every letter printed was their nitty-gritty unpicking of what clothes could mean and a celebration of diversity in style.

These days magazines that occupy a similar location/time independence, or ’zines that try to go beyond surface skimming, are in greater abundance. Maybe this is due to tensions between the digital and print publishing worlds, or maybe it’s a zeitgeist thing. But to survive in a media saturated world, printed magazines often choose to exist in a space which is like the savouring delight of the meal you’ve spent an afternoon concocting. Worn was, I suppose, like those – but also not quite. The content seemed less about presenting a very deliberate lifestyle, and more about opening a dialogue with our lives through varied sartorial matters. It’s this minor shift of framework that allows the words to go beyond the specifics of the Worn visual language. In reading issues, you can learn and think about fashion, and through this discover its dimensions for yourself. In the editor’s letter of the final issue, Serah-Marie talks about how she’s a maker. Breaking things down into easier, more digestible parts so as to understand better. It is this sentiment, that weaves into some of what I’m trying to do here, with this Citations series and indeed the whole fashion thing, whatever it may end up being.

For 18-year-old self me in 2009, the pages of Worn showed me the depth and diversity in dressing and fostered a thirst to learn more about everything beyond that. Worn existed – and maybe still does – with a diverse heart, questioning mind and DIY soul. And that’s something worth citing.

Hello, I'm Leah. A textile artist and content designer based in London, UK. I turn complex ideas into things you read, wear, see and feel. END_OF_DOCUMENT_TOKEN_TO_BE_REPLACED