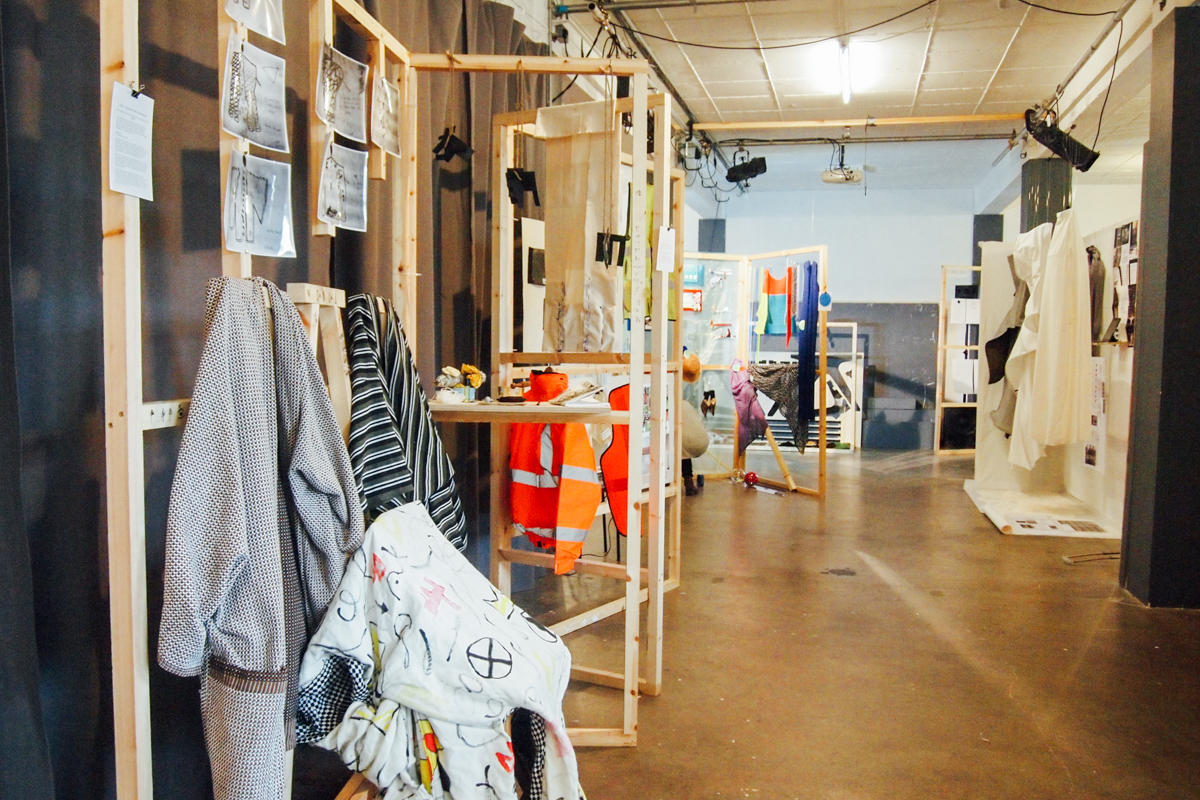 Two months have elapsed since we did this exhibition now, but I thought it’d be good to write a little something about it anyway. MA work is pretty much what my year has been and will be focusing on, and I’ve been wading through the murky clouds that have cluttered my view for some time. However, before I start delving into that, let’s rewind to June: Us MA Fashion Futures lot put on a work-in-progress show at Machines Room in Hackney. Because y’know, it’s easier to explain the hard-to-explain in exhibition format, with a few glasses of free wine thrown into the mix.

When people ask me about this MA, I get a mixture of guesses about what it consists of. Some people presume it’s to do with trend forecasting, and once or twice I’ve had people guess it’s to do with sustainability. The thing that’s tricky to explain about Fashion Futures is that whilst it is informed by environmental and ethical concerns, it’s not necessarily tied to sustainability in a traditional sense. After a year and a half of grappling with the course, and watching it mold itself through changes in tutors (teething guys, so much teething) I’d more accurately describe it as a micro space for thinking and testing new ways of working within fashion. There is a lot more breadth than a typical fashion design course, as you often draw on knowledge from other fields when you’re developing alternative propositions. However, I’ve found that this makes it a damn sight harder to understand and explain too.

With such openness, it’s fairly hard to brandish those doing MA Fashion Futures with the same brushstroke. Sure there are similarities, but then there are cultural differences, or philosophical differences, or aesthetic differences… because hell, that’s what makes life interesting! To get us all to focus our work and get some input from others, the work-in-progress show was put on. The piece I displayed was called Soliloquy, because essentially I was thinking out loud what fashion meant both personally and through the tag grid, socially too. But we had a whole host of other things too: a clothes swapping app, the deconstructed anatomy of a pair of jeans, a clothing landfill with a deep-fried sock, interviews with makers about their process, projects on material development, design manifestos and a whole bunch more too.

More than anything, this was the first time I really felt part of my year group. Having studied part-time, my timelines have varied and I’ve followed the course with two different years. However, doing the WIP was lovely in this respect. It brought us all together, allowed us to see one another’s work properly, and provided some much-needed clarity before we enter into final project time. All round good fun!