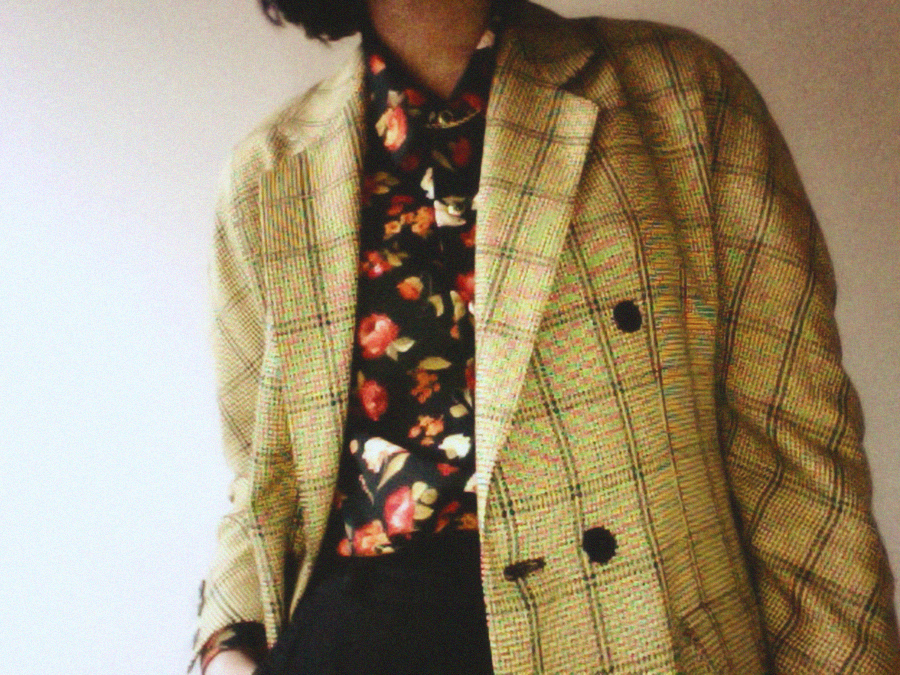 A good few years have passed since I took part in outfit blogging. It’s not really something I think much to do these days. Partly because there are enough people documenting their clothing online, and partly because my wardrobe seems a little lacklustre at times. I would say money and time are the causes, but that would indicate that interestingness in appearance is dictated by those factors. My idealistic notions do not wish to believe that, though our current fashion system does seem to suggest money and time are the lifeblood of this, so-called interestingness in how you dress.

Sometimes, I remember the practice of photographing an outfit though. Locating the trusty tripod, before darting backward and forwards within the 10-second timer on the camera – I never had a photographer boyfriend, as the running joke says. Documenting chance outfits is not something I would say I ever truly enjoyed, but it was something I did. Because I liked clothes. Because I was exploring my aesthetic preferences and sense of style. And most of all, because I was intrigued by how all these appearance-related matters, could alter perceptions both internally and externally. I’m not sure what’s really changed between then and now. My trails of thought lead me along the following tangents: maybe it’s the overloaded content landscape we’re living in nowadays. Or the constructs of beauty which mean that if you’re not a perfect doll – and such people are a visual illusion – there is almost an obligation to dress more outlandishly in order to be seen in the same way. Maybe it’s the unsustainable contradiction that exists in daily outfit blogging, where bloggers feel they can’t post the same things twice. Or is it more personal than that – a lack of confidence as the chief reason for not photographing full outfits. Maybe it’s all of these things and more?

Whatever the reason, when wondering where I stand in my sartorial explorations, the only supposition that springs to mind is a standstill. A halt in the road because the unguarded experimentation has, temporarily, vanished. The deliberate transience and obsolescence of the fashion industry is tiring. The ethical issues are deflating. And aesthetically, we have a verifiable supermarket of style-scapes, yet choice appears limited. It’s all a bit complex for something that is supposed to be frivolous. What is needed, I realise, is a shift of perspective. Passion for something outside this field, or active change of current paradigms, or even a slow recollection of the earlier attraction to appearance-related matters perhaps.

There is a distinction between what one actually wears, and what one imagines is possible for fashion as a creative form. A distinction which is not particularly pronounced for me, if indeed it ever will be. As a person in this world, having a choice in either is a privileged position, I do believe. One that is often written off too quickly by those who, ideologically or systematically, seem to miss the role of the physical body in identity formation. It is important, though my tangential musing today is highlighting the negatives somewhat. Self-portraiture, especially when it is literally you and an image-making device, is actually quite an intimate experience, and sharing it with others places a different context to it. That probably applies to any creative pursuit, but for our purposes, it brings me neatly back to outfit blogging. From the perspective of its layered place between private identity play to a public presentational ploy, documenting outfits can still be admired. And if viewed as a creative practice, much like traditional design or image-making, then could it theoretically be developed as an entity in itself?

If I am ever to participate in outfit posts on here, I suspect it’s rare that I’ll follow the prerequisite of full-length imagery. For me, the interest lies more in the intricate clockwork behind the façade of clothes. The details. The nuances within a clothed body, whether mine or another, and the talking points surrounding that. And maybe, that is the slow recollection I need.

Hello, I'm Leah. An artist, designer and writer based in London. I turn abstract ideas into things you can read, wear, see and feel. END_OF_DOCUMENT_TOKEN_TO_BE_REPLACED