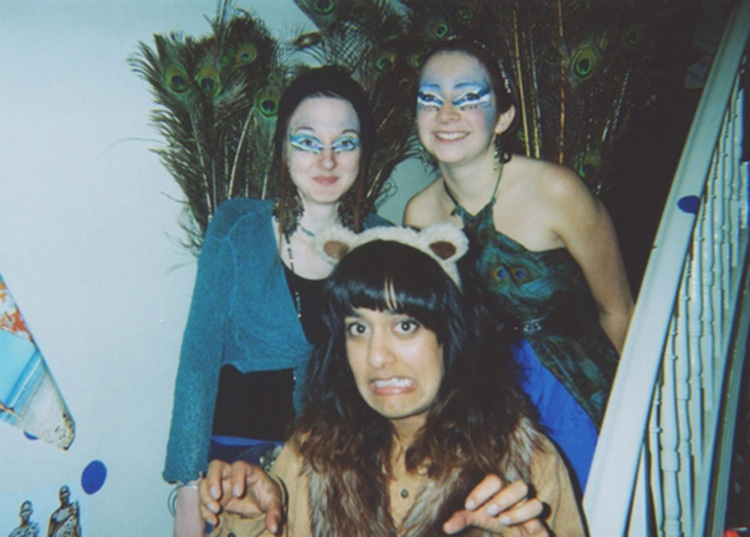 A few years ago, my friend Jon had a blog. On it, he wrote a post about his fancy dress costumes which struck me as an idea worth thieving. As everything in my life has been feeling a bit heavy, I think we ought to talk about something silly instead. Today is the day the idea thievery happens, and we shall delve into my own backlog of fancy dress. Plus, with Halloween coming up, it seems perfectly apt. 2007: Book launch of Harry Potter 7. Mary & I dressed as Hagrid and Buckbeak. We were the oldest in costume. I wore a wig on my face, she wore sparkly leggings… I’m not sure what more I can say.

2010: Dandy Man. Readers of my old blog may remember this one. The first year of university, my flatmate had a superhero themed party. We all left our costumes to the last minute and make-do-and-mend came into full force. One friend went as “box man” in a cardboard box. I think I got the better deal.

2011: Toucan. Once upon a time, I went to visit my friend at Oxford. She took me to a bop. It was jungle themed. The end. 2011: Jon’s 21st and halloween. We dressed as clowns. I wore my liquorice allsorts shirt, courtesy of Mary’s Dad. It rained when we left the house. Bedraggled clowns entered the club we landed in.

2012: Techno Starfish. Carly’s birthday was “Under the Sea” themed. I bought some poor quality, yet oh so shiny fabric from seemingly the only fabric shop in Bristol. My first attempt at a starfish costume went wrong. The second attempt saw me working for 5 hours on the day of the party to stitch up the magic you see above. The costume got recycled 8 months later for a “Space” themed evening. Waste not, want not. 2012: Noah’s Ark party. My pal Dan and I share a birthday. So for our 21st, we decided to share a party. I decided the theme was Noah’s Ark, Dan agreed and much fun was had. My costume was a lion and that is the most terrifying face I could muster, apparently. I’m sure I’d get exiled from my pride if I really were a lion. Anyway, there were peacocks, zebras, bears, doves, two people who came as one another and God. We threw another party for our 22nd, which was Myths & Legends themed. Sadly, my Woodland Nymph costume was crap and few photos were taken. 2014: New Year. After that, there was a long fancy dress break. Until the New Year’s Eve just gone. The theme was “the future” and I made a shiny mirror dress. You can read more about that one here. Needless to say, it was a costume that rustled, as much as it shined.

So there we have it. A brief history of my fancy dress outfits. How about yourselves?