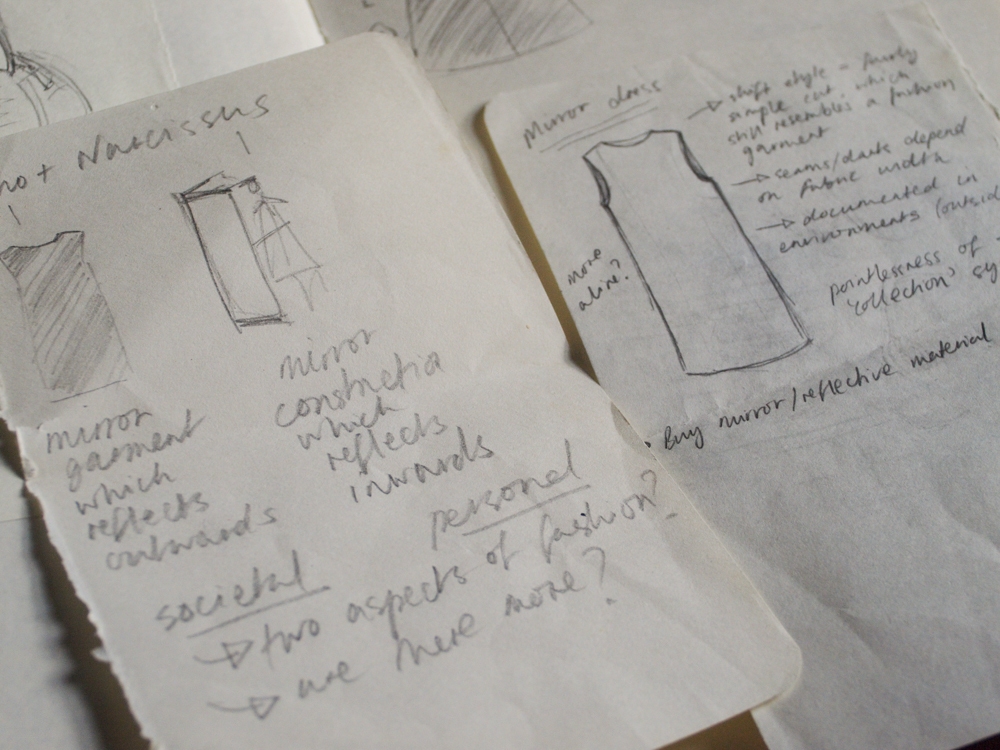 Over-thinking. It’s what I do apparently. Especially when it comes to creative ideas over the last year. They just twist and turn, contorting within the small space between my skull, yet never truly resolving because the doing is essential for that.

One idea is a piece deriving from the fashion as a social phenomena theory that circulates. I’ve been a little dubious as to what extent dress can reflect society, and in thinking about past influences, I began to remember the story of Echo & Narcissus. Which made me think of mirrors, as the perfect embodiment of both characters in the tale – vanity and reflection. As such, the question whistling from the corner of my lips was:

What if we had a garment with a mirrored surface, allowing it to mimic the environment directly surrounding the wearer? A literal reflection. In my mind, I pictured a shift-style dress and wasn’t sure why for some time. I thought that such a garment is a relatively simple structure, maximumly mirror-esque, and yet still archetypal enough to convey “fashion” in the very westernised sense that it is viewed. Or maybe 60s futuristic designers, like Paco Rabanne or André Courrèges were my aesthetic references? Regardless, I thought it was high time, I tried the doing part of this project. Testing to see if it would work. So I bought some reflective material, with the intention of making this garment to document in context – outside, on the street.

And there it sat, this material, for over a month after its arrival. The courage to find my voice still evaded me and I stared at the shining roll for a long time, wondering about the manifestation of this piece. Form is final when it comes to art & design, which does not always bode well for over-thinking or perfectionism.

It remained there, until two days before New Year’s Eve and the future-themed evening I’d agreed to go to with friends. Requiring a costume, my pragmatic side decided to hijack this previous idea. Killing two birds with one stone, as they say.

I finally made the piece.
And it really didn’t work. It functioned wonderfully as a fancy dress costume. The future is shiny, ridiculous, and full of glitter obviously. But as a representation of this artsy fartsy idea? Not so much. The material wasn’t rigid enough to reflect surroundings, whilst also lacking the necessary smoothness to chameleon the world around in the way I’d envisioned.

After realising this, I saw little point in documenting this item properly. It seems the sort of idea which would need to be made in a harder substance. Perhaps in the way of Hussein Chalayan’s 1999 Echoform fibreglass pieces – where I’ve also nicked today’s title from – in order to resemble the mirror. Maybe I’ll revisit the idea at a later date, but for now, writing here is enough.

Creative ideas are funny in this way. They work so well until you actually start testing things. At which point it changes so rapidly. Materials affect what results; meaning testing and trialling sooner rather than later is vital. This is a truth I knock up against regularly because it works contrary to how my mind seems to function right now. However, it is important to remember for future projects and indeed, life.

Do, alongside the thinking.

Hello, I'm Leah. An artist, designer and writer based in London. I turn abstract ideas into things you can read, wear, see and feel. END_OF_DOCUMENT_TOKEN_TO_BE_REPLACED