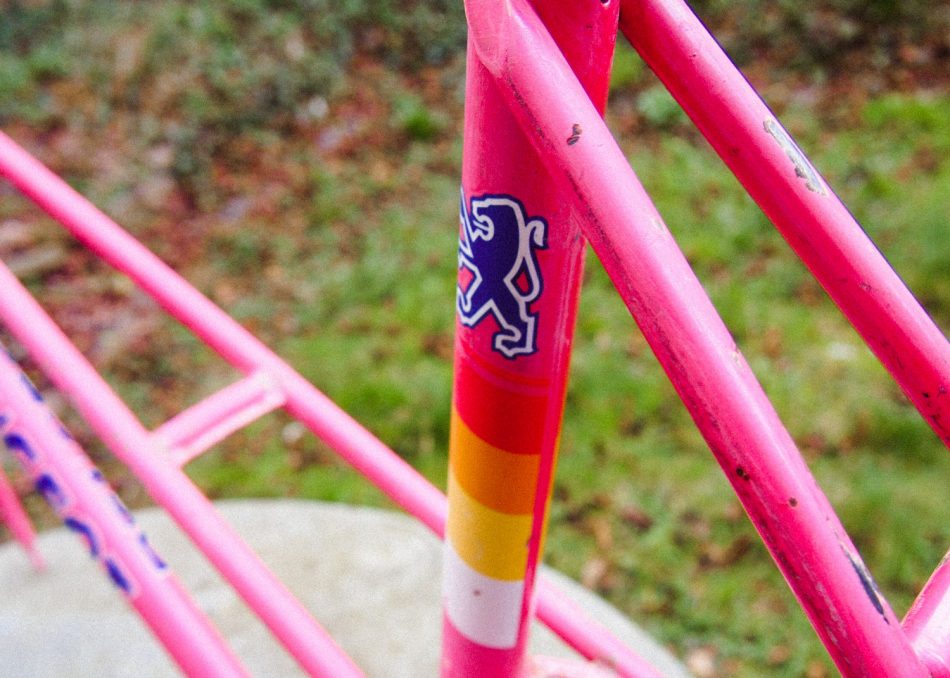 Since moving to London and working for Meame in 2015, I’ve become a fully-fledged cycle enthusiast. Surprising maybe, given how hectic this city can be. My reasons for cycling are honestly, pragmatic ones. It reduces my tube bill, it’s occasionally quicker (particularly for local journeys) and it adds some exercise into my routine. It also eases my anxious environmental conscience because at least it’s a change that is in my power to make.

Since I fear a pricey bike would get stolen in London, secondhand is the way I go. Rosa came to me from Camden Cycles in 2016, after my first bike, Goldie, packed in and would’ve been an expensive hassle to fix. Rosa is a vintage Peugeot ladies bike with that classic dual bar style in the frame. A bike that has a solid build quality, but with a hot pink colour that was a little too garish for my tastes. Still, pragmatism overrides, and I thought it better to get something that rode well and change the looks later on. Fast forward nearly two years when a punctured tyre escalated into a sudden decision to give Rosa a full fix. Hot pink be gone, I thought, it’s time for something else. Then I did what any DIY enthusiast would do – I looked at a load of tutorials online and started stripping my bike. Off came the wheels, the handlebars, the seat, the gears, brakes and just about everything I could. I was clueless, and eventually took the frame to my mum’s house and managed to rope my brother into helping me fix it up.

There we sanded off as much paintwork as we could, stripping the frame back to the bare metal. Then we primed it. Then used Spray.Bike bike paint in Battersea to refresh the colour, before finishing with a clear lacquer. The colour came out a touch brighter than I was expecting, but I preferred a bold aquatic tone to the screaming pink by a long way.

After that came the battle in reassembling. I took some parts from my dad’s old bike (handlebars, gear shifter and front derailer), bought some bar tape, a new seat and kept the rest. Even though I eventually had to take it to my local bike repair shop to get it finished, the process did actually teach me more about my bike than I ever knew before. Repainting a bicycle is definitely not a DIY for the faint hearted. If I were to repeat it, I’d probably budget for a proper power-coating service for the longevity honestly. Spray.Bike paints are easy to use for amateurs like me, but a year on and I do have some chipping here and there. However, the perk of DIYing is that I’m a hell of a lot less clueless about the parts, how they fits together and how a bike actually works. It makes me want to ride it more for the joy of it. Plus, I have a whole new level of ownership of my bike than I did before.

This site uses Akismet to reduce spam. Learn how your comment data is processed.