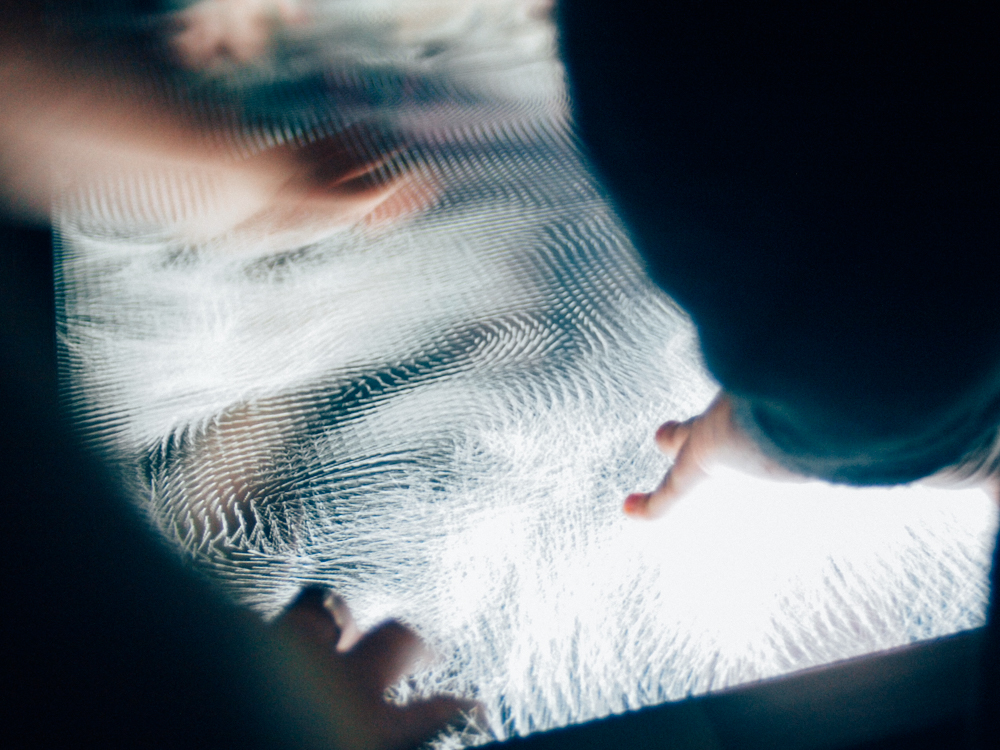 Digital seems to be having a moment of late, at least in my corner of the world. Whether it’s former Loft pal, Yinka, co-curating Future Curious, or the recent Digital Disturbances exhibition at my current university; the crossover of technology and humanity has become a hot topic in the art & design world.

This integration of digital spheres and humankind has been fascinating me for a while too. I’ve written before about outfit blogging, and about reliance on technology for communicating. I’ve also, in more academic places, written about social media and body image, and fashion blogs. The digital world is captivating. You’re reading these words on a screen, through a network of connected computers and via a web browser. It’s an incredible mathematical and engineering feat, quite frankly. But what exactly does it mean to be human with these riveting new toys? I’ve been considering this lately, and consequently absorbing various projects and readings I come across. In Paris over the summer, I went to the XYZT: Les Paysages Abstraits exhibition (or Abstract Landscapes) by Adrien M/Claire B. I had no idea what to expect beyond playing with light, but something about the project really struck me. And I’ve not quite managed to formulate the words to describe why. (This is me trying.)

So, the exhibition was in a darkened room, with various pieces installed around the room. Each piece was a material thing – in the sense that a physical body could interact with it – but fused with digital technology in its production. For instance, Arbre à Lettres (Letter Tree), used a tulle structure and video projector, to create an image of a tree that grows and sways majestically as if it’s being blown by the wind, before the leaves turn to letters and blow away. This piece perhaps exemplifies the poetic nature of the XYZT project, with its direct connection to nature and literal use of words – the Romantic Sublime, so to speak. It is ephemeral because the tree disappears, but the continued repetition of the digital projection contradicts this moment a few minutes later. The majority of work within the exhibition actively involved the participation of the viewer to function. Though no doubt programmed, without the human body touching the screen, or waving their arms, or blowing from their mouths, many pieces would not have worked. The light moved or materialised through interaction with a person, and it was this that strengthened the project. For me, digital spaces and projects often feel quite flat or unemotive because they are rarely multisensory. As it currently stands, we prioritise sight, then sound and touch, and smell and taste rarely factor in at all. Movement and a sense of space do occasionally appear, but largely only in bigger, installation projects such as this. I think this contributes to a lack of emotional depth when interacting with digital things. However, this is where XYZT works well – it is sensorial. It does actively ask you, the viewer, to engage. Not just through looking, but in moving, in touching and becoming part of the piece. It plays between the digital and our naturalised reality.

Add to that, the pace of the exhibition. It was slow. You moved into this darkened area, filled with other bodies wanting to play with the same things you did. In this sense, it took time to move through the pieces, as multiple participants necessitated waiting. Yet I also mean slow in the timing of the pieces. Some had a delay and others did react instantly, but the lights tended to move fluidly. It paused and slowed you down, contrary to the usual complaints about technology. Of course, this may be influenced by being in a gallery, which often is like a vacuum from the real world. Bu I think there was something deliberate about this structure. Whilst there are no concrete answers for the philosophical pondering about digital spaces and humankind, this was a thoroughly enjoyable exhibition to wander around. It made me consider methods of portraying these notions but through an altogether more emotive way. It was poetic, in a between the lines sort of way. And it did transfix me in a way that I still can’t quite place into words.

An exhibition worth checking out, if you get the chance.

Hello, I'm Leah. An artist, designer and writer based in London. I turn abstract ideas into things you can read, wear, see and feel. END_OF_DOCUMENT_TOKEN_TO_BE_REPLACED